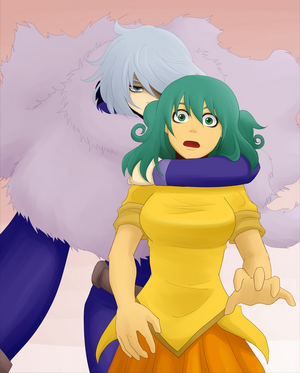 The story begins with a young girl named Kubera Leez who survives the tragic destruction of her village, and the mysterious magician, Asha Rahiro, who rescues her. They embark on a mission of revenge, with the resulting consequences reaching further than the girl could ever imagine. During their journey, they meet various other characters, from the fire priestess Brilith Ruin to the youthful-looking Yuta who is on a mission of his own. All the while, an army of suras, somehow connected to the mysterious God Kubera, searches for Leez.

Kubera takes place in a fictional universe with multiple planets and dimensions (realms) full of many colorful and varied inhabitants. The story is focused on one planet in particular, Willarv.

The author of Kubera[]

The name of the author, Currygom, means "Curry Bear" in English. She explains that she came up with her pseudonym because she likes curry and looks like a bear.[1] What is known about her is that "J" is her initial, she lives in South Korea, she has a brother, and she loves Indian food.

Currygom has stated that Kubera (Korean name: 쿠베라) was originally planned to be a romance-fantasy novel, but she later changed her mind and made it into a webtoon. She also wrote a prequel, the finite, in novel form.[1]

In July 2008, Currygom began publishing Kubera in Naver's Best Challenge tier, which is equivalent to the Discover tier on LINE Webtoon where new artists can publish their webtoons without pay. Near the end of 2009, after completing 31 episodes, Currygom received the news that her story would be promoted to the top Webtoon tier, for which she would receive pay.

On February 7, 2010, Kubera was officially re-released after being rebooted. The drawing style as well as the story itself went through many changes.

The series is still ongoing, and currently in Season 3.

On June 30, 2014, the English version of Kubera was released on Naver's new global platform, LINE Webtoon.

The English version is 2-3 episodes behind the Korean version.

Community content is available under CC-BY-SA unless otherwise noted.
Advertisement